When it comes to your data, the phrases privacy, security, and anonymity are thrown around a lot. But what does each one mean, and how do they relate to mobile phones?

Privacy is about choosing what information you send out into the world. There are some things that most of us like to keep private, such as your bank account balance, browser history, and medical records.

Security is preventing others from gaining unwanted access to your information. This would be like someone hacking into your bank account, or someone stealing your credit card number.

Anonymity is revealing whose information is released. For example, if you buy something at a store with a credit card, the store will know your name. However if you pay with cash, the purchase is anonymous. In both cases the store knows what you bought and how much you paid, but with cash they don’t know who bought it.

To use another analogy, when it comes to a house security would mean having a good door lock, bars on the windows, an alarm system, etc. Privacy would mean closing the curtains so that no one could look inside. And anonymity means that no one would know who is actually living in the house.

When it comes to mobile phones, the same principles apply. The security of stock Android is very good. The odds of having your data compromised by a hacker are very small. After all, when was the last time you heard of someone having their phone hacked? For the ultimate in security, you can install GrapheneOS which provides significant improvements in security. If you are using LineageOS, security is compromised slightly by having an unlocked bootloader. However in order to steal your data, someone with advanced knowledge would need to have physical access to your phone for an extended period of time. To us, this seems about as likely as someone drilling an underground tunnel into your basement in order to break into your house. Theoretically possible, but not really a major worry.

For privacy, that is much more under the control of the user. With a stock Android phone, much of your data is transmitted back to google’s servers. Many apps also have built-in trackers which are used to siphon data, not to mention all of the tracking done by websites. Using a de-googled phone with the right apps will go a long way towards preserving your privacy. Vigilance is a must, since you always need to consider what data you are putting out there. Companies have an insatiable thirst for your information, and it takes constant awareness of what you are giving them.

Anonymity is also a choice. For your phone service, do you use a prepaid service that was purchased anonymously with cash or a gift card? Or does your phone carrier know your name, DOB, and SSN from a credit check? If you use cryptocurrency, are you using an anonymous currency like Monero? Or if you use Bitcoin, was it purchased anonymously, or from an exchange where you had to give out your name? In our opinion, privacy is more important than anonymity, but there’s no reason why you can’t have both in many cases.

To sum up, all Android phones are reasonably secure from hackers and malicious apps. Some may want the additional protections of GrapheneOS, but for most people that’s not needed. With a de-googled phone, and the right choice of apps, privacy and anonymity are within reach as well.

Get your free e-book: 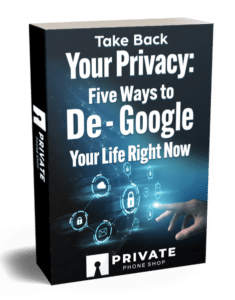 You’ll also get our newsletter with the latest privacy news and tips.  Plus if you decide to purchase one of our phones, we’ll throw in a free 1-month VPN subscription to iVPN, paid for anonymously and pre-installed on your phone.